Is International B2B Lead Generation a Good Idea for Your SME post-Brexit?

In the current climate, Britain's small B2B business community could be forgiven for thinking that politicians and economists are trying to strong-arm them into selling overseas. Too many voices are demanding that SMEs do more to export, but has anyone stopped to ask if international B2B lead generation is right for them?

Therein lies the problem, no one has asked those SMEs if selling overseas is right for them… Instead, assumptions have been made along the lines of:

If these assumptions are true, how did SMEs arrive at a place where they're 'afraid to export,' or simply refuse to engage in export activity? The answer's obvious, isn't it? No one asked them 'why' they're afraid to export or why they wouldn't?

Download the Case Study: How One B2B SME Grew Their Export Sales By 3000%

In fact, rather than asking why, the SME community in the UK is being somewhat shamed for its perceived lack of export activity. A recent World First report practically accuses SMEs of being directly responsible for Britain losing out on a 'potential' £141bn because of a so-called 'SME export gap.'

The short answer as to whether international B2B lead generation is a good idea for your SME post-Brexit is yes. However, trying to 'guilt-trip' small business owners into exporting is entirely the wrong approach.

Brexit has intensified calls for SMEs to do more in the export market.

Undoubtedly, Brexit has fuelled calls for SMEs to do more in the export department. The problem is, too many voices are 'telling' small B2B business owners that they 'need' to be exporting, rather than explaining 'how' they can overcome the challenges of international B2B lead generation.

Equally, efforts to coax SMEs into exporting only serve to benefit the interests of the UK economy rather than highlighting the potential reward for each individual business.

Take this quote from Jonathan Quin, CEO and Co-Founder of World First:

"The value of the export opportunity to the UK economy is enormous and so much more needs to be done for the UK to fulfil its potential as a trading nation" [emphasis Export Worldwide].

Obviously, Jonathan Quin's quote is in response to the aforementioned World First report – we don't want to take it out of context. However, Mr Quin's comments do bear a resemblance to widespread attitudes concerning SME exporting, which is 'SMEs should be exporting for the benefit of the UK economy, not their own survival.'

Equally obvious is that every SME in the UK is dependent on the national economy for their survival. However, in reality, business owners are not immediately concerned by the strength of the UK economy, they're concerned about acting in the best interests of their business.

Moreover, SMEs take issue with being preached at when there's very little support on offer to convince them that international B2B lead generation is the right step for their business. Some would argue that support for SMEs is available… and they'd be right, but there's a fine line between 'available' and 'accessible.'

The problem with some means of export support is that it's open to every business. In the interests of the UK economy, big businesses get priority, pushing the little guy to the back of the queue. So, while politicians and economists make all the right noises about helping SMEs to export, the reality is very different.

SMEs need direction not condemning when it comes to exporting.

UK SMEs have been very vocal about the problems they face with international B2B lead generation, which begs the question – why is there still a lack of help? The media, politicians and a whole host of research papers have seemingly sided to condemn SMEs for failing the UK economy.

Data published by World First makes for depressing reading, but the report does at least give us a few pointers as to where the problems lie for SMEs when it comes to international B2B lead generation.

You can probably relate to these problems. However, what can you do to overcome these challenges when you don't have the resources that the world's biggest exporters have? The answer is an international B2B lead generation channel.

Export Worldwide, for instance, empowers you to sell overseas at low-cost and low-risk. The channel enables you to promote your products and services in up to 20 languages that represent 84% of world trade, cutting through language barriers.

Export Worldwide as used by Armagard showing leads coming in from Belgium, Finland and Indonesia.

International lead generation services are a ready-made way for your SME to penetrate new markets fast and grow your business. They're especially useful if you don't have international versions of your website already in place.

From your desk, you can identify markets where demand for your products and services exists and refine which countries are worth targeting. In terms of cost, convenience and speed, Export Worldwide offers excellent value.

It really works too. So, rather than being told that your SME needs to be exporting, discover for yourself that international B2B lead generation is a good idea, not for the sake of the UK economy, but for the sake of your company's survival. 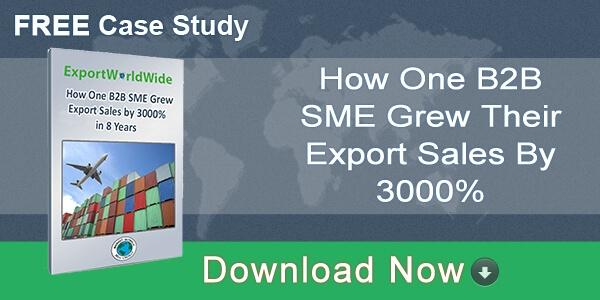