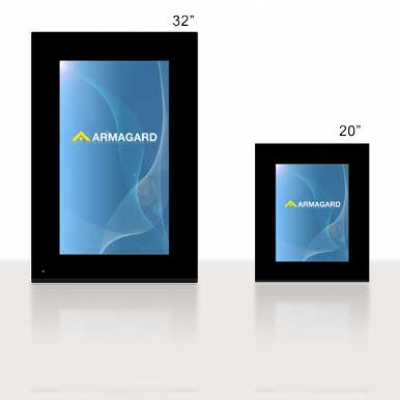 Portrait screens not as good as people thought

Portrait, the vertical installation of an LCD screen, seems far more common for digital signage rather than the horizontal landscape orientation that we watch our televisions at home. But is it any more effective for advertising?

Despite the prevalence of digital signage and the continuing expansion of the industry, little research has been carried out into the effectiveness of screen orientation until now.

Some recent recall tests conducted by a leading digital signage company has discovered, quite surprisingly, that the opposite to most digital signage users expectations that in fact, landscape orientation of an advertising display has better recall than a portrait screen.

The research, using two identical advertisements, one in portrait orientation and one in landscape (with identical sized text, same fonts and colours etc) was shown to an audience who were asked about their recollections of the advertisements, and the results turned out to be quite surprising.

The test (which were by no means scientifically controlled) found that the recall for landscape orientation seemed to have far better recall than portraiture, a result that may shock many installers and users of digital signage.

While any causes for these results are merely speculation, attention zones and familiarity of seeing screens in such orientation (ie out TVs at home) could have something to do with it.

Of course, portrait orientation does have other advantages—on limited wall space in a concourse, you can erect more digital posters side-by-side than you can landscape, but if the effectiveness is weaker, the approach to digital advertising may change in the future.

For information screens, the recall is perhaps less important. When people want to know the location of a store or find out when their train leaves they’ll obviously remember the information they’ve discovered; however, for advertisers who need to try to stamp their messages into people’s memories, things may change in the future.