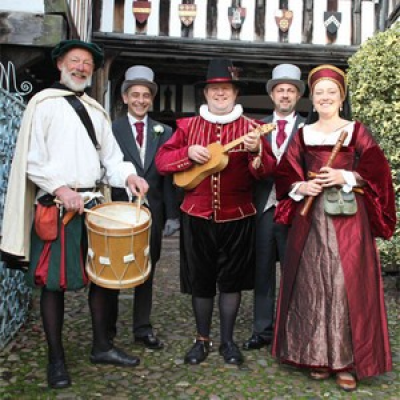 Throughout history, music has played a vital role in military life. The music and instruments are almost as significant a symbol of identity as the colours of a regiment.

In the modern day, too, the symbolic influence of military music is evident across the globe.

Greek and Roman armies would always employ musicians and military instruments to play in all areas of military life. At this time, military music had two purposes.

Firstly, it was an easy way to convey orders and communicate with the troops. Second, it could play a motivational role for the soldiers. Greek armies would recite tales of past heroes to the accompaniment of music to remind soldiers of their strength and courage.

It was the Crusades that had the greatest impact on military music in the Middle Ages. Crusaders were inspired by the Saracen military bands, along with the array of military instruments.

As it was for ancient armies, regiments performed military music on the battlefield as a way of conveying orders, as well as motivating the troops as they entered battle.

Returning Crusaders brought back Saracen military instruments and a concept of martial music. These products, mostly drums and brass horns, were then popularised and integrated into various armies.

These newly formed military bands began to travel with the army, and they created the origins of marching bands as we know them.

The development of modern technology led to significant changes in the world of military music. Military bands were no longer required as a means of communication on the battlefield. Military music therefore became symbolic, performed to motivate troops and instil a sense of patriotism and identity.

Through the development of radio and film, national governments found it easier to spread propaganda and national pride with the help of military music. This was important, especially in Britain, around the time of the World Wars. Moreover, the ceremonial role of military bands increased greatly. Bands became more prominent at parades and state events, thus helping to shape the identity of the forces they represented.

The function of military music began to change in this period. Advancements in military technology played an important role in these developments.

Military music in the 21st century differs even from that of 100 years ago. While military bands were no longer required on the battlefield in the 20th century, their music still served a purpose as propaganda during wartime.

Now, however, you will largely only find military bands performing at ceremonial events. Bands perform to entertain troops or the public, to welcome a foreign member of state, or as part of a special event.

Military music, too, no longer has such a pronounced tone of propaganda. This is because it is not a tool to encourage enlistment in the armed forces. Although military bands still play patriotic music, the tone is more that of national pride and identity.

We can see that military music has changed greatly throughout history. From conveying orders with basic horns and drums, to sophisticated military bands performing at ceremonial events, music has always been an essential part of martial life.

With a successful track record of manufacturing and delivering military instruments, BBICO has supplied numerous orders and tenders to Africa and the Middle East.

BBICO has expert knowledge of the requirements of a military band. This makes everything so much easier for the customer.

View our products and contact us on the form below to find out more.