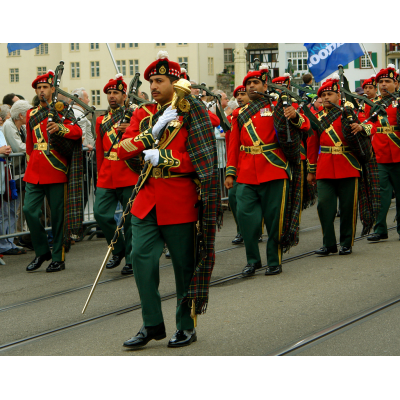 In the modern age, the military bagpipe has gained worldwide notoriety for its usage in British military and pipe bands. The reed instrument has long been identified as synonymous with Scottish music, with evidence of musicians playing them in the country from around the 13th century onward.

It would be wrong, however, to assume that this is where we find the origins of the military bagpipe. Its history goes back far beyond medieval Scotland, with evidence of early versions found in ancient eastern civilisations.

In this article, we will follow the path of the military bagpipes from ancient Egypt through to its prominence in Scottish military and pipe bands.

The two main predecessors to the bagpipe were the shawms and hornpipes. Evidence for these reed pipes dates back to around 2500 BC in the near eastern and Egyptian civilisations.

The shawm was a wooden wind instrument with a double reed and a long narrow cone as a sound tube. It was widely played across Asia and Europe.

The hornpipe was a single reed instrument commonly made (as the name suggests) from an animal horn. The hornpipe became associated with the Hellenic world before becoming the instrument of the street musicians in the early Roman Empire.

Historians believe that musicians added bags to these pipes, to assist with blowing, as early as Roman times. These are, therefore, the first examples of bagpipes in the style that they appear today.

We can see that bagpipes have a long and established history dating back to the ancient world. At this time, pipes were not affiliated with any nation or people but were a versatile and universal instrument.

Historians have found little evidence of bagpipes or similar instruments for the period between Roman times and the 12th century. Written sources from this time focus on military and religious affairs, while the nature of woodwind instruments means material evidence is in short supply.

Around the 12th century, Europe experienced a revival of the arts, science and literature, which paved the way for the Renaissance period two centuries later. The Crusades between 1096 and 1291 played a significant role in this. Unique interaction with the Middle East and its culture instigated an influx of scientific and musical innovation into Europe.

During this period, bagpipes influenced by the Middle East spread throughout the continent and became a universally-performed instrument. Eastern Europe developed its own bagpipe traditions, as the instrument became popular in folk music.

Indeed, bagpipe performances were a staple of Bulgarian feasts and weddings for generations as the instrument became part of national culture. It is likely these traditions were a result of the same Middle Eastern influence as in western Europe. 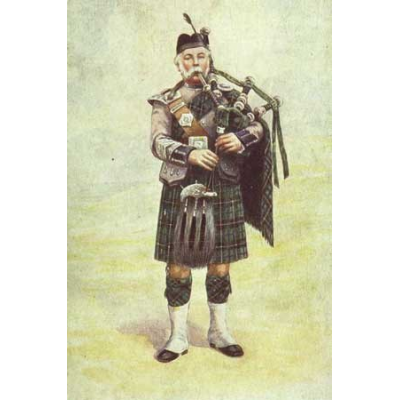 Evidence of bagpipes in England started to appear in the 13th century. Sources suggest the instrument’s popularity spread across Europe and through Northern France to the British Isles.

It is not known what form this bagpipe took. Some suggest it was a droneless instrument known as a chorus. Others, meanwhile, believe it had a similar appearance to the gaita, which still survives in North West Spain.

Most of our evidence comes from stone and wood carvings in church buildings. British architecture features many examples of pipers and bagpipes in the 14th century. From these sculptures, we can see the how the instrument spread from England to Scotland.

Carvings at Melrose Abbey date back to the rebuilding of its Cistercian monastery in 1385. It is important to note that the instrument’s image matches the standardised European form. This tells us the Scots did not invent their own bagpipes but adopted them from Europe.

Evidence of bagpipes started to also appear in Ireland around this time. The instrument took on the same appearance as in England and Scotland, suggesting the European influence spread from mainland United Kingdom across the Irish Sea.

From the late 18th century, the British Army travelled the world with military bagpipes. The highland piper would perform as a soloist or as part of a pipe band.

To this day, military bagpipes play an important role in the culture of the British armed forces. Indeed, the British Army has its own training facility for bagpipes and drums. The Army School of Bagpipe Music and Highland Drumming, founded in 1910, is located in Edinburgh, Scotland. To be a qualified piper in the army, a musician must pass a series of courses at the school.

These modern military pipe bands, however, are not the primary influence for those in Asia and the Middle East. As we have seen, this area of the world has a long-standing history of bagpipe performance. They therefore have their own style and influences, which is evident in their performances of Arabic music rather than traditional British songs.

The British Band Instrument Company (BBICO) can help with all your military bagpipe and pipe band needs.

Using our expert knowledge and excellent relationships with leading brands, we will supply and deliver any military band instruments you require.

Contact us on the form below to discuss your marching band requirements.