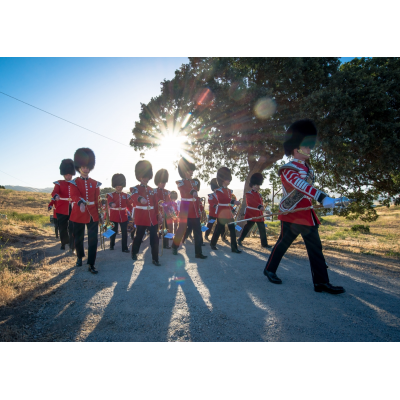 Perhaps you are an established group looking for replacement military band supplies. Or maybe you need marching band instruments for a ceremonial event and do not know where to begin your search. Whatever your situation, British Band Instrument Company will help you decide which instruments you need and will provide everything for you.

What is a marching band?

For centuries marching bands have played an essential role in military life. Historically, they would perform on the battlefield to provide uplifting music for the troops or convey orders.

The very term ‘band’ is steeped in military tradition. As early as the 16th century connotations of a military group emerged. It probably derived from the Spanish term for a distinguishing band of cloth which troops held aloft. Alternatively, the term may come from the late Latin word bandum – a banner – identifying a military designation. It is therefore likely soldiers would use the term ‘band of musicians’ to distinguish the designation of the regimental structure. As a result, marching bands originally provided a sense of regimental identity through tunes and marches.

Modern military marching bands, however, serve a more symbolic purpose, and mainly perform at ceremonial events and international celebrations. In doing so, they are crucial to defining a country’s identity and instilling a sense of national pride. By playing patriotic songs and national anthems, a military band is often an essential domestic representative on the international stage.

Which instruments are used in a marching band?

Though the size and composition of a military marching band may vary, its instrumentation is largely standardised around the world.

Woodwind instruments feature in most military bands, particularly piccolos, flutes, saxophones (mainly alto and tenor), and Bb clarinets. Many marching bands consider other woodwind instruments such as oboes and bassoons too impractical for an active and mobile recital. However, when the music calls for it, these instruments too can add to the timbre of a performance.

Percussion instruments are also an essential part of any marching band, responsible for keeping tempo for the group. Generally, the percussion section contains snare drums, tenor drums, bass drums and cymbals. Marching band instrument suppliers provide adapted versions of these instruments which musicians can play easily while on the move. Other percussion instruments such as the glockenspiel, xylophone, and marimba also occasionally feature in military bands.

For more information on how BBICO can assist you, use the form below to contact us and view our full product range.