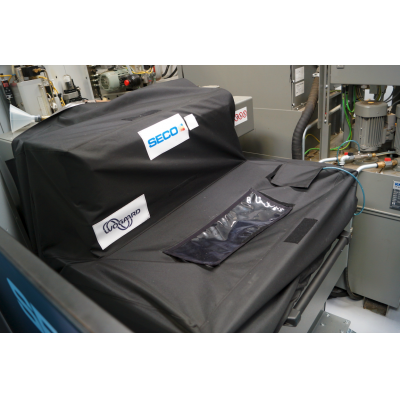 Initially, Seco Tools gained significant results from the installation of a Wogaard Coolant Saver which led to the units being installed across all of the production machine tools and the formation of an engineering partnership between the two businesses. This partnership has now been extended to include the recently launched Keep-it-Covered swarf bin covering system from Wogaard.

A diverse range of machine tools on the shopfloor at Seco Tools UK Technology Centre in Alcester, Warwickshire are used to produce bespoke cutting tool bodies and additional ancillary items for its customers in the aerospace, motorsport, medical, marine, power generation and general precision engineering sectors.

Engineering Team Leader, Alan Fellows, says: “Like most production machine shops, prior to installing the Coolant Saver we had not focused on coolant other than to select a water miscible product that performs well. The two major issues we identified were environment and cost. There are two elements to the environmental consideration; first is the internal part where we achieve better housekeeping, with fewer chances of leaks and spills, and less material handling as the machine’s coolant sump does not require topping up so often and the pH balance of the fluid is more easily managed.”

Part two of the environmental issue is external as he says: “The whole manufacturing industry in the UK has raised its game environmentally; it no longer has the old oily rag and boiler suit image that it used to. To meet the ‘dry’ swarf requirements of our recycling partner we had to leave our swarf bins to drain for a few hours before the Coolant Saver was installed. This has been negated as the coolant is syphoned directly back to the machine tool’s sump via a vacuum created by the coolant pump. It does not even require an external power supply.”

He also explains the rationale behind the installation of the new covers. With the company adopting a ‘5S’ approach to attaining the good housekeeping required as part of a global drive from Seco for its business hubs. Aiming for aesthetic appeal to create a workshop that is closer to laboratory cleanliness rather than an engineering shopfloor environment, where there is a sense of pride in the workplace.

Such has been the success of the Wogaard Coolant Saver since it was introduced to the cutting tool specialist that when Managing Director, Jason Hutt, approached Seco with the concept of the new skip covering system, the company was very keen to discover more.

"Based on the results achieved by the Coolant Savers within Seco’s workshop the staff were willing to listen to some suggestions of what could be done with the covers to improve the housekeeping along with proposed costings,” says Jason Hutt. He made some detailed measurements and produced some preliminary covers to which Seco wanted to add a brand logo for the cutting tool business along with some machine specific Coolant Saver access points and so on.

Although the cost is a major consideration the company has not spent too much time analysing the savings. “They are so significant and the return on the investment is so fast there is no requirement to spend time drilling down into the fine details,” Alan Fellows says. “We are returning in excess of 5 litres of coolant to the sump from every swarf bin, and the time wasted draining the bins has been removed.”

The new Keep-it-Covered initiative from Wogaard has certainly helped achieve Seco Tools shopfloor goals, and as a secondary consideration has also reduced the risk of fumes escaping into the workshop atmosphere.

Initially there was resistance from the shopfloor as it was perceived that the covers would make it more difficult to gain access and empty the full swarf containers. “The reality is the covers can be removed and replaced in a matter of seconds, the time required is not even measured in minutes,” states Alan Fellows. “And, the viewing windows in the covers let us check the swarf level without disturbing the cover seal.”

The technical partnership provides a synergy between Seco Tools and Wogaard, allowing both companies to highlight the benefits of each other’s products to visitors attending the Technical Centre.

View other products from Wogaard Ltd

View other articles from Wogaard Ltd

View other products from Wogaard Ltd