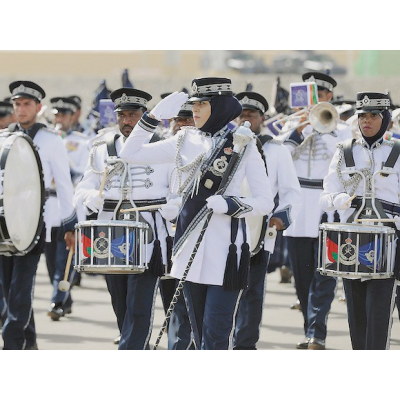 The history of military bands

The earliest examples of military bands are thought to date back to the 13th century, hailing from the Ottoman Empire. Groups then formed in the armed forces across European nations which were inspired by those military bands. Originally the colonel of a regiment would hire civilian musicians to perform, until the mid-18th century when enlisted men took up the role of military band members.

Traditionally, military bands would play music on the battlefield to boost the morale of the troops. Furthermore, drummers would summon men from their farms and land to call them to service. Military music also played a vital tactical role during battle, giving certain instructions to soldiers. Indeed, this was the only way commanders could convey orders to their forces in the midst of battle.

These days military bands no longer play a key role on the battlefield. Nevertheless, their significance to an army and to a country is undeniable. The musicians of armed forces across the globe perform at numerous special events, from state and national ceremonies to the visit of an overseas Head of State. Other occasions where military bands perform include military reviews, public relations events, and troop entertainment.

A military band will perform a wide range of music. The country’s national anthem, patriotic songs, various concert marches, brass band music and arrangements of orchestral compositions are all vital in a military band’s repertoire.

The pride of a nation

Playing the national anthem for a visiting Head of State is an essential part of a military band’s job in the armed forces. One of the first impressions that the visitor will hear, see and feel is the impact of the military band performing their national anthem. Consequently, the nation’s pride is reflected in the honour bestowed upon the welcome visitor.

Throughout the visit at state receptions and banquets, military bands will continue to perform patriotic music at every occasion, therefore reflecting both national and military pride. In many ways, the military band will be the representative of the armed forces and the country during such a visit.

People often underestimate the importance of the part that music plays in every country’s life. It is rarely so when it comes to the part music plays in a country’s ceremonial exposure. Military musicianship, therefore, is internationally of the highest order.

The British Band Instrument Company Limited has long led the way in providing the manufacture and supply of musical instruments and accessories to military bands of armed forces around the globe.

BBICO is proud to work with a wide range of high quality suppliers. These include:

Find out more about how BBICO can equip your marching band.

View our products and services today and contact us using the form below.